Unfortunately, Internet Explorer is an outdated browser and we do not currently support it. To have the best browsing experience, please upgrade to Microsoft Edge, Google Chrome or Safari.

Building an event experience to unite, invite, and inspire.

The New York Project is a 10-year strategy led by Redeemer Presbyterian Church and Redeemer City to City to accelerate a movement of citywide renewal, mercy, and justice. Each September the New York Project hosts a 3-day event called Momentum Weekend as a strategic opportunity for invested partners to engage with the vision. Open Book's role was to provide full-service communications leadership on how the New York Project tells, shows, and shares their story at this signature donor event.

Three days of sessions, updates, and stories were packaged together under a unifying, aspirational story. This common message served as both a theme and focused way of inviting guests into a big vision.

Open Book worked closely with the New York Project team to identify and shape the narrative, brand, and live event experience for Momentum Weekend, as well associated communications strategy for the $80 million campaign. The goal was to tell a story that would give people from across the country a tangible experience of what is happening on the ground in New York and what their partnership can catalyze.

We developed a unique, signature theme for Momentum Weekend that simultaneously spoke to the overarching vision and the the real-time growth of the movement on the ground.

With “Every home loved” as a cornerstone message in the brand, we focused on building it out with simple language and a visual tone that was low-pressure, friendly, and invitational. The outline of a home became a visual connection between the EncounterLife logo and the campaign vision.

We simplified Vivo's existing color palette to the simplicity of black and white accented with a vibrant green. We introduced multiple typefaces and shapes to create a sense of playful imagination in the brand. Like the meals they create, Vivo's new brand led with a sense of creativity unleashed before-your-eyes. We also built momentum around the hashtag #tastepossibility and social media ads as they generated excitement for their grand reopening.

Open Book created a new logo that embodies this refocused mission and story. Core to TreeHouse’s point of view is a belief that transformation is possible—and it happens from the inside out. So, we developed a logo that’s a nod to the growth rings of a tree, which develop over time, from the inside out. This rings also show the compounding impact of a transformed life on individuals, communities, and beyond.

We worked with Riverbridge to flesh out the story that surrounds "invest with endurance." It was important to highlight both the optimism and specificity of their approach. Their lead messaging now elevates their belief that what is true endures⏤in investments, people, and companies. Both visually and narratively, we positioned Riverbridge as builders. In a world where people are not experiencing superior returns on their investments because of shortsighted behaviors, Riverbridge is on a mission to invest with endurance.

We crafted a visual identity that represented the three-part strategy of new leaders, new churches, and new buildings—plus the most important part: YOU, represented by a red location pin. This was a strategic choice to underscore that Rise was about activating everyone into new service and outreach from right where they are. As a whole, the logo was also reminiscent of the four-square cross that had long been a feature at one of the Redeemer sites, as well as a grid of city blocks, since a neighborhood call to action was central to the campaign story.

The story we developed focuses on the core idea that life is not meant to be a series of disconnected dots. At the modern university, the issue of living a divided life can feel like the norm for people who see themselves as both academics and Christians. Faith and academics are seen as parallel at best—and, at worst, in opposition, But Anselm House is inspired by the Scripture that says, “In Christ, all things hold together.” We helped Anselm give voice to their grounding mission: "to connect faith and knowledge with all of life."

We helped Stony Brook crystallize that the kind of leadership vision they emphasize is the ability to "see beyond"—beyond information to application, beyond what's expedient to what is wise. Our storytelling captured Stony Brook's heart to raise up life-long learners who don’t just wait for answers but keep asking the right questions, leaders who transform information into insight, and citizens who approach their communities with eyes for the common good. 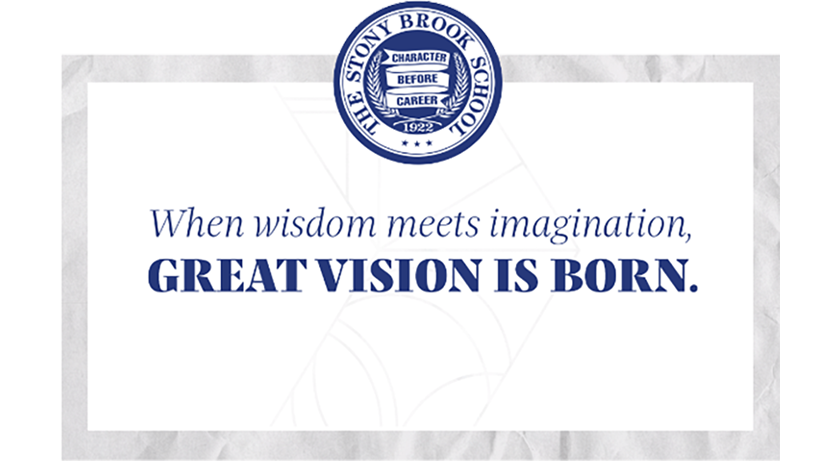 We developed a visual identity that evoked the bold, classic look of New York City, paired with a unique message and look that communicated momentum, motion, and possibility.

A new streamlined website leads with the story and provides clear pathways to the tools and resources EncounterLife offers.

We built a website that invites visitors directly into the opportunity to invest with endurance, providing clear and efficient pathways to key information. The new site is a clean and modern shift from their old site, while also providing flexibility to build upon as they customize messaging to core constituents in the individual, institutional, and retail channels they seek to serve.

We created a straightforward website that featured the different dimensions of Vivo—dining, catering, and gathering spaces. The platform features Vivo’s story and vision, as well as visually sets the table for what guests can expect.

We created a robust Rise website that connected vision to action through streamlined content, photography, and resources. During the campaign, users also had a custom page where they could place a location pin, which allowed people to see engagement growing across the five boroughs of New York.

We designed the new TreeHouse website to be equally relevant to donors, volunteers, teens, and community members. We aimed to build a site that was simple to navigate while clearly telling the story of what TreeHouse does and the invitation it makes.

We created a new website to house their content, and to position Anselm House as not only a credible, academic resource for the University, but also as a community of prayer, shared meals, open discussions, and faithful presence.

We created a suite of branded books and print materials to guide guests through the weekend, from how they are oriented to how they are invited to engage. The cornerstone piece was a 32-page Mission Investor Guide that unfolds the momentous history and bold vision of the New York Project, inviting guests to see themselves as part of the growing momentum. Every detail—name tags to place cards, table menus to thank you notes—was branded and customized to make guests feel intimately part of a community going after a big vision together.

Open Book advocated for, and helped plan, a major kick-off event that generated 2,750 people in attendance. Attendees were not told that it was a launch event for a capital campaign, much less told the name Rise. Instead, we helped position it simple as an important night of vision-casting. Then, at the event, the Rise story, vision, video, and invitation were unveiled comprehensively. Nearly everyone in the room ended up walking forward that night to fill out a personal geo-marker card with their commitment to be part of the Rise campaign.

We developed overall event messaging and talking points for the lead speakers and communicators of the New York Project team. This involved finding both succinct soundbites and effective narratives that reinforced the big-picture vision at play while also illuminating specific metrics and reporting.

EncounterLife decided used the new brand story as a launchpad for a state-wide event for Colorado churches. We worked with them to name the event "We Love Colorado" and developed materials and custom packaging to serve as invitational outreach tools.

A restaurant needs a brand you can experience at every meal and every visit. We created menus, table signage, gift cards, and a 30-foot mural to surround the place in the feeling of possibility.

Throughout the weekend, video served as a central vehicle for communicating story and casting vision. This included a 3-minute video that we wrote, filmed, animated, and crafted to present both the sense of longing and possibility at the heart of the initiative. We also created animated event loops and other custom screen content that kept motion, faces, and artistry front-and-center throughout the event experience.

Accelerating a city-wide movement of and for the good of New York.